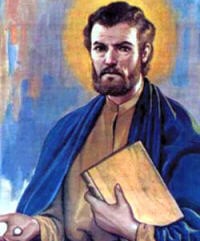 Clement of Alexandria says that, according to tradition, St. Matthias was one of the seventy-two disciples whom our Lord had sent out, two by two, during His ministry. This is also asserted by Eusebius and by St. Jerome. We know from the Acts of the Apostles that he was constantly with the Savior from the time of His baptism until His ascension.

Soon after St. Peter declared that it was necessary to elect a twelfth apostle in place of Judas, two candidates were chosen as most worthy – Joseph, called Barsabas, and Matthias. After praying to God that He would direct their choice, they proceeded to cast lots, and the lot fell upon Matthias, who was accordingly numbered with the eleven and ranked among the apostles. He received the Holy Spirit with the others soon after his election, and applied himself with zeal to his mission. It is stated by Clement of Alexandria that he was remarkable for his insistence upon the necessity of mortifying the flesh to subdue sensual appetites – a lesson he had learned from Christ, and which he faithfully practiced himself.

The first part of his ministry was spent, we are told, in Judaea, but he afterwards went to other lands. According to the Greeks, he planted the faith in Cappadocia and on the coasts of the Caspian Sea. He endured great persecution and ill-treatment from the savage people among whom he worked, and finally received the crown of martyrdom at Clochis.

We know nothing for certain of the matter of his death, but the Greek Menaia and other legendary sources say that he was crucified. His body is believed to have been kept for a long time in Jerusalem and to have been transferred from there to Rome by Saint Helena.